landscape dreams of an unmortal mind

For Paintings Jam, I've submitted Landscape Dreams of an Unmortal Mind, an itsy-bitsy, artsy-fartsy set of experiments inspired by landscapes (0, 1, 2, 3, 4, 5, 6) created by Joel Simon's Artbreeder - a few dungeons, a few broader scenarios, some worldbuilding, generally enlivened by random tables. I tried to go with "paintings" that struck me as being semantically coherent in some way, but that weren't quite what a human would come up with. It's a shame, and not only for professional artists, that as these algorithms get "better," they'll be more mimetic of what humans would paint - I wanted to celebrate a certain degree of awkwardness, or rather distinctiveness, in what my robotic friend would come up with.


Per Artbreeder license, all images are public domain, and I didn't see any reason not to apply that to the text as well. Best viewed in a pdf reader with facing dual pages and separate cover page. Simmering possibility of violence, subordination of the mind, body horror, and profanity - though none of them forming predominant elements - may understandably displease some readers.

Most of the paintings were made by playing around with other images produced by Artbreeder users, which in turn were made in the same way - follow the image links above to see each picture's "genealogy."

Unicorns: the astonishing science behind the myth

FACT: This superstition has a considerable basis  in truth; unicorns scorn the married as they scorn parents, and are most often found by those in the flower of young adulthood. But a unicorn may grace avowed sluts, as they disdain those who have taken holy vows. Those who have been "married" according to the fiction of local law but without their consent may find a unicorn, but not every thing that may repel the unicorn is freely chosen: no man or woman in line to inherit a throne, despite what the stories may tell you, has ever seen a unicorn, except perhaps from a great distance, carrying some other hero.

Unicorns are creatures of most awesome and terrible Law, bearers of Obligation, and will not subject anyone with currently standing obligations to the fulsome grace of their presence.

FACT: Unicorns frequently oblige persons to quests which are nonsensical, amoral, or simply catastrophic. An untalented young artist is as likely to be charged by a unicorn with writing the Great National Epic as a talented one; good governments as well as bad are assigned to be overthrown; unicorns may appear to unattached persons and charge them with installing terrible tyrannies. Two persons who have seen the same unicorn may be sent on logically incompatible quests.

The extent to which a unicorn chooses either the victims or their new obligations is unknown. While meeting the unicorn and taking on their task is greeted with delight by some, and feels as though voluntarily taken on, it is known that many others despair of their new obligations.

MYTH: The unicorn is a mythical elaboration of a real creature, the monoceros of distant lands.

TRUTH: Many mythical creatures, such as the rhinoceros, the triceratops, the ki-in, and the dryad, fatal to be seen in her nakedness, are garbled second-hand versions of that very real creature, the unicorn. The morphological diversity of these creatures underscores that the unicorn may not look just like what one expects. One may be in your peripheral vision right now - but you will not notice it, unless the conditions are right. 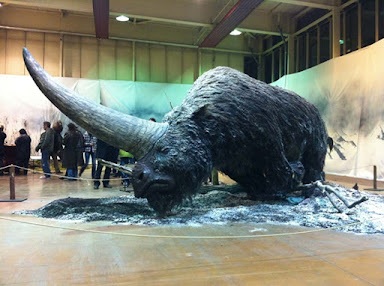 MYTH: Unicorns are the sworn enemies of Night-Mares, and will do battle with them.

TRUTH: The night-mare is but the unicorn driven to insistency. Against an obstinate acquaintance who dallies or refuses her quest, a unicorn visits in sleep to offer unwelcome encouragement in the form of restless dreams and mornings of unwished memories. These tend to get worse over time.

It is true that some black-guards have been known to ride night-mares into battle. Some people react to the night-mare's tortures by inuring themselves rather than complying, and by overcoming their fear of the enraged unicorn, they may tame it and ride it into battle. To so harden oneself is a rare feat, however.

MYTH: A unicorn's presence and unwished charges can be banished by losing one's virginity. Related myth amongst those disabused of Myth #1: the unicorn, and in particular its manifestation as the night-mare, can be thrown off by taking on new obligations - marrying, being elected to office, or perhaps even a simple vulgar oath.

TRUTH: Few myths cause quite as much disaster as this. Far from hemming in the unicorn, taking such oaths permits the jealous night-mare to visit its horrors upon those to whom the oath-taker has attempted to oblige herself.

MYTH: The unicorn is beauty and grace.

FACT: As anyone who has met a unicorn can attest, some myths are true.

Email ThisBlogThis!Share to TwitterShare to FacebookShare to Pinterest
Labels: monsters

Nick Whelan of Papers & Pencils has created a lovely set of tables for dungeon brainstorming, representing years of work - a monumental resource. The following button represents, by contrast, several minutes of work, and is just a straightforward way of randomly rolling on the same.