Philosophical considerations on the concept of the pig orc

The pig orc is a hybrid, in more ways than one. As a beast-man of some variety, it is some sort of compromise between human and pig: perhaps in its origins some kind of literal hybrid, perhaps a convergent evolution of the boar towards bipedalism and talkativeness, perhaps a bioengineered warrior race, perhaps pigs which have reclaimed the bipedalism and chattyness that jealous men and their gods stole from them at the beginning of time. But in its conceptual use it is also a hybrid between the "orc" as we have received her from Tolkien, warcraft, warhammer, und so weter, and this pig-man. We are aware that the orc is Problematic (arguments to this effect will not be rehashed here; you either know and accept or know and reject them, but I'll be taking them for granted), and prompt reconsideration of paths not taken, such as the forays into the pig orc which our hobby once considered. By doing so we hope to rescue the patrimony of the orc - all the sustained half-lore and ideas that we've built up over the years, orc prayers and orc warfare and all the rest - from the vast condescension of a guilty conscience. Like a dying uncle who made a fortune from assorted bad deeds, or rapping slavers, we want to save the parts we've grown accustomed to and wash our hands of the rest: we want, as we have always wanted, to kill the orc and take her stuff. "Heritage, not hate!" 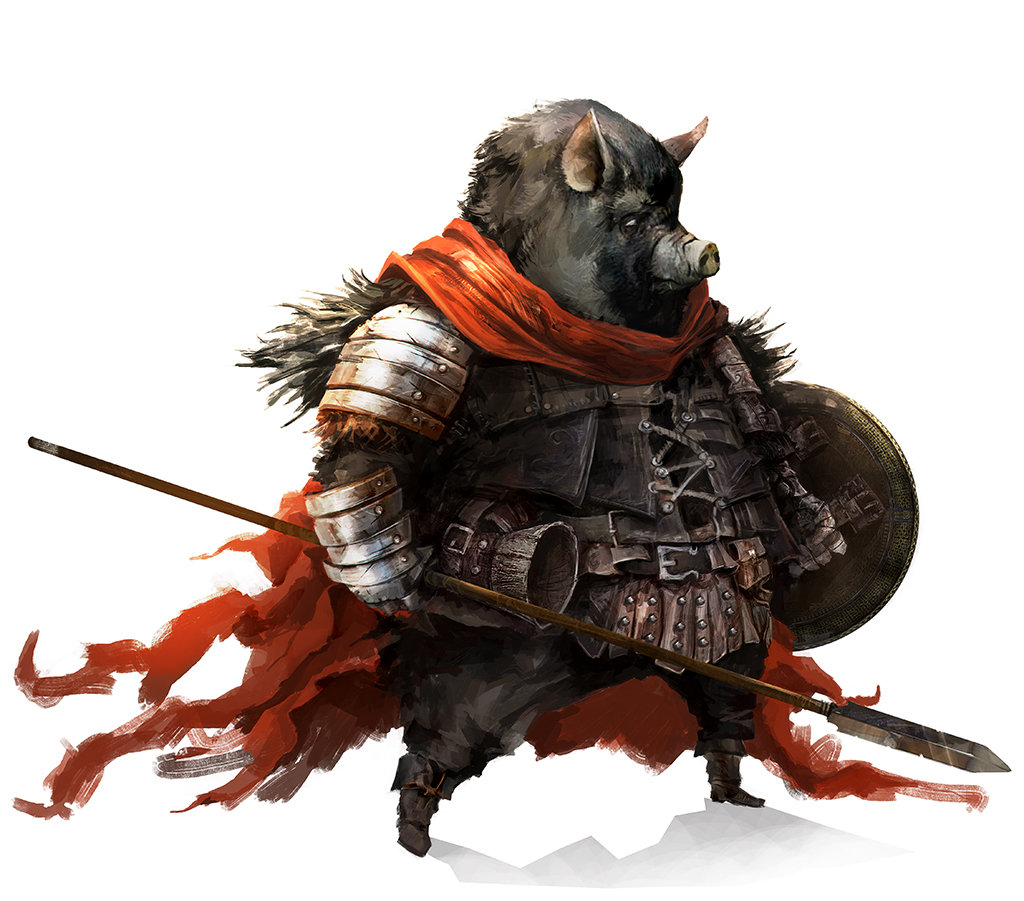 This is all just an uncharitable and spicy way of saying that the pig orc splits the difference in a productive way: all of the innocence of the cute furry animal races, all of the (salvageable) heritage of the word "orc." (In a vacuum, one could find anthropomorphic races a case of pseudospeciation with a long racist history, but in practice that's not how people read it - we associate talking upright animals with goofier and more forgivable vices - and since we're talking about symbols, how people take it is the truth of the matter.) Moreover, we get mileage out of it: centering "pig" within the name "orc" lets us reflavor and worldbuild our orcs in any number of ways, rethinking them in a new light. (Pigs like to sniff out truffles; what is the relationship between the pig-men and the mushroom-men?)

Moreover this is not just a one-time concept, but a repeatable move. Most obviously, you can consider the other Canonical Fantasy Races. What are the differences between elves that are plants (as in Glorantha), vs. cats, peafowl, jewelry, beta fish? Dwarves that are termites, bats, naked mole rats, mushrooms, automata, pitbulls? Halflings that are frogs, rabbits, potatoes? (And what is the difference between "cat elves" and "catfolk?" Surely that you're injecting some sort of Tolkienian melancholy into the concept of cats.) Ontologically "penguin lizardfolk" (or whatever) becomes possible just as soon as the concept of "lizardfolk" starts exceeding "lizard + folk," outgrows its old suspenders and can be draped in new clothes.

This can be extended further, of course. A farmer wizard breeds and cultivates spells, whereas a dentist wizard notices problems and fixes them painfully. A lion tamer cleric has a different relationship to the gods than a diplomat cleric or your usual fawning servant cleric. A starving artist fighter really cares about their technique in a different way.

How far can this be extended?

Maybe I have just gotten overexcited by the idea of analogies?